One fine Friday night, Carpet Head and I decided to watch a movie and the only one that fit our schedule was Kick Ass. We seriously thought we were going in to watch a kiddie superhero movie. We were SO WRONG. Kick Ass turned out to be humorous, action-packed, VIOLENT, and very entertaining. We’ve never heard of the comic, so I guess we really didn’t know what we were getting into. Think Ninja Assassin or Wanted type of violent. Definitely not for kiddies, kiddies.

The scene stealer in this film is also the most controversial character. Hit Girl, played by Chloe Moretz (Diary of a Wimpy Kid, 500 Days of Summer), is a foul-mouthed little girl who really knows her weapons. The character is controversial obviously because she’s a gun-toting, balisong-wielding little girl who spouts off offensive language and kills grown men. Well, it’s a movie based on a comic, and if one knows any better one would understand that it’s all just for entertainment. I wouldn’t recommend this movie to kids though. It’s supposed to be R-18 in the U.S., but our very own movie review board gave it a PG-13 and with no cuts, I think. Ahihi. 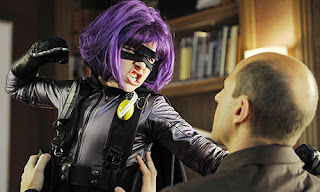 Look at that murderous face. I am now a fan of Chloe Moretz. She’s been cast to play a vampire in Let Me In (an American version of Swedish vampire movie Let The Right One In) and in Martin Scorsese’s The Invention Of Hugo Cabret, alongside Sacha Baron Cohen and Sir Ben Kingsley. Can’t wait to see those.

* screencap from the net