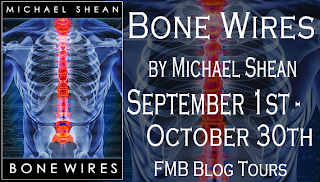 This is my review stop for Bone Wires, a dark science fiction mystery novel by Michael Shean. I joined this tour because the book title reminded me of the movie The Bone Collector and the blurb made me think of Criminal Minds and CSI! Sometimes the words science, forensics, detective, and serial killers just get at me when it comes to books, shows, and what not. Read more after the jump!

In the wasteland of commercial culture that is future America, police are operated not by government but by private companies.
In Seattle, that role is filled by Civil Protection, and Daniel Gray is a detective in Homicide Solutions. What used to be considered an important – even glamorous – department for public police is very different for the corporate species, and Gray finds himself stuck in a dead end job. That is, until the Spine Thief arrives.
When a serial killer begins harvesting the spinal tissue of corporate employees all over the city, Detective Gray finds himself plunged into the first truly major case of his career. Caught in a dangerous mix of murder, betrayal and conflicting corporate interest, Gray will find himself not only matching wits with a diabolical murderer but grapple with his growing doubt toward his employers in the dawning months of the American tricentennial.
A thrilling mystery set in the same world as the Wonderland Cycle, Bone Wires is a grim trip into the streets of the empty future.

Deciding to join this tour was not a mistake at all. This book definitely had all the semi-creepy yet fascinating combined goodness of science, forensics, detectives, mysteries, and serial killers. Plus it’s set in a cool futuristic world where the cops are privatized and everything’s all about the money, meaning people and companies are all over corporate profits, consumerism, and all that capitalistic stuff.

This book was easy to read and I liked the author’s descriptive and kind of colloquial writing style. It read like futuristic street and it was easy to picture the world where this story is set. I think the author definitely did well building his unique world and getting that world out to readers. I’m trying to think of movies or other fictional worlds that would describe my impression of this futuristic world. Maybe… the grit and crime-ridden dark streets of Gotham with the high rise towers and bright neon lights of the Fifth Element, plus the technology of Minority Report and maybe Gattaca. Then throw in your typical hard ass detectives and police. Maybe, maybe not. Bottomline, this futuristic world that Shean’s created is crazy cool.

This book also had a pretty interesting set of multi-dimensional characters. The good guys, bad guys, major characters and minor players all felt like very real people and had something offbeat or interesting about them–wild ambition, crazy creative genius, tattooed faces, hollowed black eyes, etc. Definitely not boring, these folks of the twisted neon future.

Storywise, this novel will take you different places–deep dark twisted places and bright holographic neon places. The twists and turns will keep you reading. The twisty darkness and horror remind me of the worst unsubs in Criminal Minds. Needless to say, I really enjoyed this book and if you’re into futuristic fiction and detective mysteries and thrillers, you might, too. Let’s hold hands and skip merrily into the night.

I received a review copy of this book at no cost and with no obligations. All opinions and views expressed here are my own.

The scene of the crime was an alleyway behind an abandoned Roziara Deli. Crowding the street outside the deli were a pair of patrol cars, white wedges of steel with ribbon lights that stained the nearby buildings red and blue. Street officers clustered around the mouth, black body armor over blue uniform fatigues; unlike the sidearms that Gray and Carter carried, the streeties carried the blunt, brutal shapes of submachine guns close to their plated chests. A cordon had been set up; the narrow yellow band of holographic tape that stretched across the alley mouth glowed as it cycled through baleful warning messages.

“They used to have good subs here,” said Carter as they pulled up in front of the moldering delicatessen.

“This is your beat then,” said Gray, who produced from the inside pocket of his suit coat a slim Sony microcomp and engaged its holographic display. Data from the Nexus sprang to life above the palm-sized slab. “What do you have for us, Martin?”

Martin winced a bit at the lack of ‘Officer’ before his surname – you got a lot of that with Pacification Services, of which street patrol was the biggest group. They didn’t like being talked down to. Gray outranked him, however, and didn’t give a shit besides. “Nasty stuff,” Martin said, jerking his head toward the alley mouth. “Victim’s name is Anderson, Ronald P.. Administration. His panic implant was set off about an hour ago and flatlined soon after; me and my partner were in the area, and when we found him…well. Real horror show back there, is all I can say. I called for backup. Dunno what they used, but…well. You’ll see.”

Carter and Gray looked at each other – streeters saw all sorts of things. If they said it was a nasty scene, they’d probably do well to get smocks and rain boots. “All right, Officer,” Carter said, at which Martin seemed to relax a bit. “Were there any witnesses, security footage, anything like that?”

“Nothing we could find,” said Martin. “This area’s been abandoned for years. Anyone who lives here cleared out as soon as they heard us coming. You know how it is.”

“Yeah,” said Gray. Don’t want to get arrested for just being around. “All right, thanks, Officer. If you and…”

“Conklin and Peavey,” Martin replied. “In the other car. Patel’s with me.”

“…Right,” Carter replied with a nod. “If you fellas can keep up the cordon on either side of the alley, we’ll have a look. Call the coroner while you’re at it.”

“On it,” barked Martin, who stepped away from the alley mouth while touching the side of his throat where a subvocal mic, standard issue for street patrol, had been implanted. Carter waited until Martin had backed up a few steps and was well into conversation before he gestured for Gray to follow him. The two men passed through the holographic cordon, the barrier no more solid than the air around it, and took a few steps into the feebly-lit alleyway. The space behind the deli was dark and thick with shadows, lit only by the dying bulb of a lamp set over the shop’s sealed back door. A figure slumped or lay in the cone of dim light that spilled across the building’s crumbling facade. The air was faintly tinged with the smell of ozone and cooked meat. The two men approached; Gray held his computer in one hand while Carter fished the flat, card-sized shape of a palm lamp from a coat pocket. Cupping the lamp in his hand, Carter threw a beam of bright blue- white light across the alleyway and clearly illuminated the corpse.

Lean and muscular in life, that which had been Ronald Anderson half-crouched, half-sprawled across the alleyway, his handsome face pointing down toward the filthy concrete. The corpse’s posture reminded Gray of an old girlfriend; she was a yoga fanatic and used to do something similar called the Child’s Pose. Anderson’s formerly clean white dress shirt had been cut open, straight down the back from collar to waist, and his belted slacks had also been cut down to the base of the pelvis. His back had been tattooed with a medieval Japanese wave scene.

Anderson’s flesh had been laid open. Arching upward and away in a v-shaped furrow, a deep channel now butterflied the man’s back half from the base of his skull to the top of his pelvis. Where his spine should have been there was only a bloodless, grayish-red channel. The red and ivory of cleanly clipped bone and cooked organs were clearly visible in its absence, his heart a gray and veined lump. It was as if the tattooed sea had somehow come alive, restless and roaring, and attempted to rise away from its host who could never have survived its rebellion.

Without the slightest drop of blood, Ronald Anderson had been boned like a fish.

“Damn,” muttered Carter, stepping forward so he could track with his light the awful wound. “Never seen that before. What do you make of it, Dan?” For Gray, who had only experienced the more pedestrian horrors of stranglings, stabbings and gunshot wounds in his brief career, there was no clean reply. “That’s the strangest thing I’ve ever seen,” he breathed instead, staring down at the carved gutter. Gray had said ‘strangest’ – however, what he had truly wanted to say was ‘most horrible’. Looking down at the murdered man, Gray knew that his ‘sexy’ case had arrived, just as he had wished for it, but the only thing he could wish for now was to be anywhere else.

As if sensing the truth behind Gray’s words, Carter snorted softly. “Lucky you, kid,” he replied in a wry and vaguely weary tone. “Lucky you.” 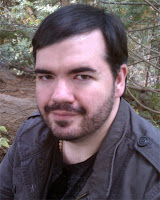 Michael Shean was born amongst the sleepy hills and coal mines of southern West Virginia in 1978. Taught to read by his parents at a very early age, he has had a great love of the written word since the very beginning of his life. Growing up, he was often plagued with feelings of isolation and loneliness; he began writing off and on to help deflect this, though these themes are often explored in his work as a consequence. At the age of 16, Michael began to experience a chain of vivid nightmares that has continued to this day; it is from these aberrant dreams that he draws inspiration.

In 2001 Michael left West Virginia to pursue a career in the tech industry, and he settled in the Washington, DC area as a web designer and graphic artist. As a result his writing was put aside and not revisited until five years later. In 2006 he met his current fiancee, who urged him to pick up his writing once more. Several years of work and experimentation yielded the core of what would become his first novel, Shadow of a Dead Star (2011). Michael is currently signed with Curiosity Quills Press, who has overtaken publication of Shadow of a Dead Star and the other books of his Wonderland Cycle.

2 thoughts on “Review of Bone Wires by Michael Shean”