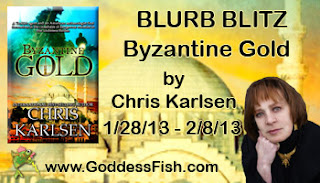 Yay another blog tour with a giveaway for yah! Read about Byzantine Gold, a new book by author Chris Karlsen. Last year I posted a review of her book Golden Chariot, which was about sunken treasure. In Byzantine Gold, the main characters from Golden Chariot–Charlotte and Atakan–find themselves in another exciting and dangerous situation involving treasure (what else?), terrorists, and a contract killer looking for revenge! Read more about the book and find out how you can win an ebook copy of Golden Chariot and a $50 Amazon GC! Arrr!! (Wait, are we finally going to see some pirates?!?)

A sunken warship from the Byzantine Era carrying an unusual cargo of gold has been found off the coast of Northern Cyprus. News of the valuable cache has attracted the attention of a terrorist cell. They plan to attack the recovery team’s campsite and steal the artifacts. On the Black Market, the sale of the relics will buy them additional weapons.

Charlotte Dashiell, an American archaeologist, and her lover, Atakan Vadim, a Turkish government agent, are scheduled to be part of the recovery team that brings up the artifacts. While en route to Cyprus, they find themselves caught in the crosshairs of Maksym Tischenko, a Ukrainian contract killer bent on revenge. Charlotte, Atakan and Tischenko share a grim history. As a result, Tischenko is a man who will stop at nothing to achieve his goal—seeing them both dead. — Get this book on Amazon!

“They are called, Angelique tulips. You admired them in the hospital garden in Paris.”

Charlotte froze, holding her breath as she listened to the nightmare voice, remembering how his Eastern European accent rounded certain sounds and how he stressed the last syllables in his words. Called became cawl-d.

“Everything in time,” he said and hung up.

Charlotte dropped the phone on the table. She turned to Atakan.

The shock must’ve shown on her face. “What is wrong?”

“That was Tischenko,” she said, finding her voice. “The flowers are from him. He was watching me in Paris when I was at the hospital. He—”

Atakan didn’t wait for her to finish. He rushed into the living room, grabbed his gun from the bookshelf, and ran out of the apartment.

Charlotte followed as he flew down the four flights of stairs to the street.

“Stop.” Catching up to him on the sidewalk, she hooked his elbow with her hand. Fearful an armed Tischenko hid nearby, she positioned herself in front of Atakan, thinking to shield him. “We can’t stand here. He could be anywhere taking aim at you right now.”

“Not without you.” She tugged on his shirt, pulling him toward their building. “Atakan please, let’s leave. Call the Director.”

Atakan shoved her behind him. Silent, his eyes searched the dark doorways of neighboring apartment buildings and parked cars.

She stepped in front of him again. “We stay here together or we leave together.”

An eternity of seconds passed. Neither moved or blinked.

They both jumped and turned at the bellow from the horn of a passing truck. Thankfully, the driver was waving to another coming the opposite direction. He never saw the man in the sling pointing a gun at him.

Atakan nodded. He stopped at the building’s entry door and took a last look, surveying the street. “He moves us around like pawns in a private game.” 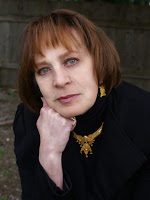 Chris is a retired police detective. She spent twenty-five years in the law enforcement with two different agencies.

The daughter of a history professor and a voracious reader, she grew up with a love for history and books.

She has traveled extensively throughout Europe, the Near East, and Northern Africa satisfying her passion for seeing the places she read about.

A Chicago native, Chris has lived in Paris, Los Angeles, and now resides with her husband, and five rescue dogs in the Pacific Northwest.