I’m stoked beyond stoked to feature the amazing Intisar Khanani on the blog today for the cover reveal of her newest novel Memories of Ash, the much-awaited follow-up to Sunbolt, which happens to be one of my favorite books of all time. Seriously, I love it so much that I’ve read it several times. The cover of Memories of Ash was designed by Jenny of Seedlings Design Studio, and to celebrate, Intisar is holding a Kindle Fire giveaway, so make sure to check it out below!

Let’s get to know the author just a little bit!

Describe Memories of Ash in 3 words.

What compelled you to write your first book?

I always wanted to write a novel, so my senior year of university I decided I’d better buckle down and try. I chose a fairy tale (The Goose Girl) to give me an over-arching plot and narrative structure, and then went to town with it. I really wrote it as an exercise to test myself, not intending to do anything with it when I finished. But, by the time I finished, I loved my characters so much that I ended up working through over a dozen revisions to take it from “writing exercise” to my debut novel, Thorn.

If you could live in one of your books, which one would you choose?

Definitely the world of the Sunbolt Chronicles. Sunbolt follows Hitomi, a street thief with a propensity to play hero when people need saving, and her nemesis, the dark mage who killed her father. Although there is a lot of darkness in Sunbolt, there’s also a lot of light. It’s a real world, in its way, and I love the diversity and vibrancy of the cultures and creatures that populate it. I’d have my choice of living in a tropical island sultanate reminiscent of historic Zanzibar, or among the nomadic desert tribes that eke out an existence alongside the cursed Burnt Lands, to name my two favorite options. Then again, in Memories of Ash, there’s the decaying grandeur of the capitol of a fallen empire that feels a lot like an Istanbul of old, right at the heart of the Eleven Kingdoms. Plus, I wouldn’t mind having shape-shifting friends and charms to keep my bread from burning.

What authors, or books, have influenced you?

As a young duckling, I imprinted on Tamora Pierce and Robin McKinley’s earlier works. I read pretty widely, but those are the authors I kept coming back to, especially McKinley’s Damar books. I am also an incorrigible Jane Austen fan, but my books don’t reflect that very much!

What are you reading now?

I just finished “Kingdom of Ruses” by Kate Stradling. In a kingdom where the eternal prince who rules is just a ruse kept up by the prime minister’s family (and most recently, Viola, our heroine), keeping the peace is a delicate thing. Enter a stranger who manages to take the place of the doppelganger the family uses, and Viola has her hands full.

Your first reaction to the cover in GIF format.

And here it is…

In the year since she cast her sunbolt, Hitomi has recovered only a handful of memories. But the truths of the past have a tendency to come calling, and an isolated mountain fastness can offer only so much shelter. When the High Council of Mages summons Brigit Stormwind to stand trial for treason, Hitomi knows her mentor won’t return—not with Arch Mage Blackflame behind the charges.

Armed only with her magic and her wits, Hitomi vows to free her mentor from unjust imprisonment. She must traverse spell-cursed lands and barren deserts, facing powerful ancient enchantments and navigating bitter enmities, as she races to reach the High Council. There, she reunites with old friends, planning a rescue equal parts magic and trickery.

If she succeeds, Hitomi will be hunted the rest of her life. If she fails, she’ll face the ultimate punishment: enslavement to the High Council, her magic slowly drained until she dies.

Add this book on GoodReads

A Special Treat For Those Who Pre-order…

Not only is the pre-order of Memories of Ash on sale for only 99 cents, but anyone who buys the pre-order will receive a free digital art print of Hitomi by artist Grace Fong. Just email your proof of purchase to moapreorder@gmail.com! Haven’t read  Sunbolt (Book 1) yet? It’s been knocked down to just 99 cents to celebrate the release and is available at most major e-retailers. That’s two fantastic books for less than a cuppa joe. 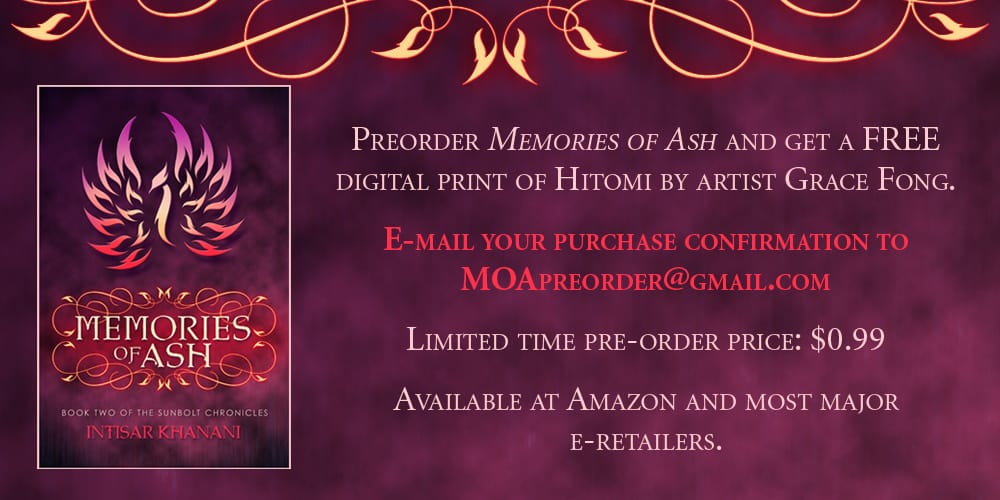 Intisar Khanani grew up a nomad and world traveler. She has lived in five different states as well as in Jeddah on the coast of the Red Sea. Until recently, Intisar wrote grants and developed projects to address community health with the Cincinnati Health Department, which was as close as she could get to saving the world. Now she focuses her time on her two passions: raising her family and writing fantasy. Intisar’s current projects include a companion trilogy to Thorn, featuring the heroine introduced in her free short story The Bone Knife, and The Sunbolt Chronicles.

1 thought on “Cover Reveal and Giveaway: Memories of Ash by Intisar Khanani”