In 13 days I will be celebrating my 7th year with the firm. SEVEN. YEARS. HOLY. MOLY. I never thought I would last seven years. Truth be told, I’m still wondering if I’m in the right industry or whether I can keep doing what I’m doing for seven years more (eep!).

Well! This is what this little quiz from FemaleNetwork.Com has to say about that:

Eeen-ter-esting. Honestly, I just want to be a mananahi. But first I have to get my buh-hind in sewing school. What are the good sewing schools in Manila?

The Physick Book of Deliverance Dane (Katherine Howe). “Harvard graduate student Connie Goodwin needs to spend her summer doing research for her doctoral dissertation. But when her mother asks her to handle the sale of Connie’s grandmother’s abandoned home near Salem, she can’t refuse. As she is drawn deeper into the mysteries of the family house, Connie discovers an ancient key within a seventeenth-century Bible. The key contains a yellowing fragment of parchment with a name written upon it: Deliverance Dane. This discovery launches Connie on a quest—to find out who this woman was and to unearth a rare artifact of singular power: a physick book, its pages a secret repository for lost knowledge. As the pieces of Deliverance’s harrowing story begin to fall into place, Connie is haunted by visions of the long-ago witch trials, and she begins to fear that she is more tied to Salem’s dark past then she could have ever imagined.”

Wicked: The Life and Times of the Wicked Witch of the West (Gregory Maguire). “Wicked is about a land where animals talk and strive to be treated like first-class citizens, Munchkinlanders seek the comfort of middle-class stability and the Tin Man becomes a victim of domestic violence. And then there is the little green-skinned girl named Elphaba, who will grow up to be the infamous Wicked Witch of the West, a smart, prickly and misunderstood creature who challenges all our preconceived notions about the nature of good and evil.”

Prozac Nation: Young and Depressed in America, A Memoir (Elizabeth Wurtzel). “Full of promise is how anyone would have described Elizabeth Wurtzel at age ten, a bright-eyed little girl who painted, wrote stories, and excelled in every way. By twelve she was cutting her legs in the girls’ bathroom and listening to scratchy recordings of the Velvet Underground. College was marked by a series of breakdowns, suicide attempts, and hospitalizations before she was finally given Prozac in combination with other psychoactive drugs, all of which have worked sporadically as Elizabeth’s mood swings rise and fall like the lines of a sad ballad. This memoir, both harrowing and hilarious, gives voice to the high incidence of depression – especially among America’s youth.” 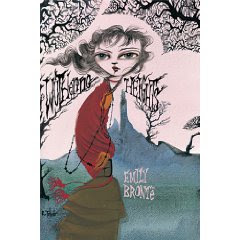 I’m currently reading Wuthering Heights by Emily Bronte. I’ve always wanted to read this not only because it’s a great classic, but also because it’s hailed as one of the most unique gothic novels of its time. I once bought one of those Reader’s Digest compilation of condensed books of gothic literature and I found it quite interesting. It’s so different from what we think as gothic these days. I guess it’s because things were so different back then. I’ve also been interested in the genre ever since I took a course on romantic literature in college. Romantic lit is really not we think it is. I mean, the one book we discussed in class was Bram Stoker’s Dracula. How’s that for romantic. Although, some may argue that it IS the original vampire-loves-mortal-waif romance.

Anyway, my desire to read Wuthering Heights was fueled more when I saw this deluxe edition by Penguin Books. Pretty! The cover is by artist Ruben Toledo.

I also saw a different edition which targeted the Bella-Edward fans. It says “Love Never Dies” and “Bella and Edward’s favorite book” on the cover. GREAT.

I didn’t buy any of these fancy editions though. I found a paperback version with a beautiful cover for only 175 bucks. Hah. Down with capitalism! LOL.

So, I’m reading this book now but I’m still on the first chapter. The old English is a challenge, but it’s beautiful.

So I was very excited last Monday to vote for the first time. Lucky for me, my precint was located at the local school just two blocks away from my apartment. At 6:20am I was already at the school. They weren’t letting voters in yet so I waited outside the gate with my fellow eager beavers. At 7:45 they opened the gates and I went in and couldn’t find my cluster. I looked up and realized that I was at the high school when I was supposed to be at the elementary school.  Brilliant. Good thing the elementary school was just next door. So I went there, found my precint, and waited in line. I was number 24 so it took a few more minutes before I got to vote. By 8:00am, I was already walking home. Easy peasy.

One fine Friday night, Carpet Head and I decided to watch a movie and the only one that fit our schedule was Kick Ass. We seriously thought we were going in to watch a kiddie superhero movie. We were SO WRONG. Kick Ass turned out to be humorous, action-packed, VIOLENT, and very entertaining. We’ve never heard of the comic, so I guess we really didn’t know what we were getting into. Think Ninja Assassin or Wanted type of violent. Definitely not for kiddies, kiddies.

I’ve yet to buy the Last Watch (last book of the Night Watch series!) so I borrowed this one, World War Z: An Oral History of the Zombie War, from my sister in the meantime. The book is a collection of interviews from survivors of the zombie war. It talks about the nature of people as individuals and as part of a collective. It touches on political and social issues, too. Very interesting and somewhat scary stuff.

What would you do if the world was overrun by the living dead? Would you have survived the war? If you want to know your odds, you can head on over to the book’s official site and find out. Apparently my chances of survival had I lived during the zombie war is 28%. Waah.

I’m currently reading the Night Watch series by Russian writer Sergei Lukyanenko, first published in 1998. I first got interested in the series when I saw bits of the Night Watch movie on cable. I read somewhere that the movie has some sort of cult following. All I remember from the movie is a guy with goggles in a subway train. Yeah, descriptive. Anyway, finally picked up the book and I’m hooked.

I finally finished reading Wizard’s First Rule yesterday. It took me a while to finish because of the story’s pace, but at least the ending was interesting. It’s the first book in a series so I guess the author had to lay out a bit of groundwork for the next books. Critics compare the series to Tolkien’s Lord of the Rings (LOTR) and both are similar in the sense that they are about magic and power and fantasy worlds. But I think that’s where the similarity ends. A major difference is that the Sword of Truth series has more empowered female characters in it. In LOTR, the powerful female characters like Arwen and Galadriel weren’t given as much significance as the male characters.

Big ass project ends this month. I am dying to wrap this up already. Work’s starting to burn me out and making me seriously unproductive. I feel like a zombie every day at work. Get far far away I must when we close. I need to clear my head, relax my bones, chill with Carpet Head…

Oh, I have a new book to read. Carpet Head lent me book one of the Sword of Truth series by Terry Goodkind. I love fantasy books so I’m pretty sure I’m going to like this one. The only thing I hate about reading a series is that it’s addictive and I will most probably pine away for the other books after I devour one. Fortunately for me I already know where to source the next three. Hah. I lurve.

Speaking of books, I stopped trying to read Watchmen. Couldn’t quite get past the first chapter without dozing off. Last week, I tried re-reading Angels and Demons, but I couldn’t spare the time. Now I’m wondering how the hell I’m going to get through Terry Goodkind. Gah.

Hmm I haven’t been writing in here for a while. I realized I feel just a tad bit self conscious now about the stuff I ramble about in here. Hmm..

The Prayer by Charlotte Church and Josh Groban is the only track on my playlist right now and I’ve been listening to it all day since yesterday. Maybe I’m feeling the need for some heavenly guidance.