Today we’re putting the spotlight on Dan O’Brien’s latest project: Mobsters, Monsters & Nazis: a collaboration between the author and Steve Ferchaud, who illustrated Conspirators of the Lost Sock Army and the Loose Change Collection Agency.

You’re never too old to have one more adventure!

Brought to life by Steve Ferchaud’s vibrant drawings, this story for all ages by Dan O’Brien lets us know that it is never too late to have one more adventure.

Today we have a fantasy novel by author Dan O’Brien. I will be posting a review later, but for now enjoy a very interesting conversation between the author and his characters! ;) 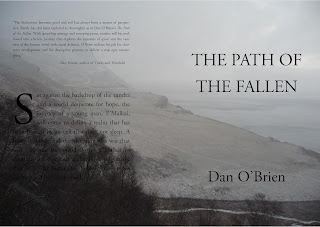 The world is broken. The coming of the Intelligence pushed the remnants of humanity deep into the tundra. What remained was a vast sea of ice and the machine city, Culouth. E’Malkai Armen, descendent of the Fallen, has been a citizen of Culouth his entire life. A bitter betrayal, and the inception of a war that will destroy millions of lives, forces E’Malkai to confront the past and undertake a pilgrimage that is his by birthright. As he travels to the cold tundra of the north, the realm prepares for war. The Path of the Fallen is a lonely and arduous path, but it must be walked for the sake of all mankind.